The Most Effective and Most Affordable Whole Room Disinfection Solution for Hospitals It takes just a few pathogens to infect a patient, employee or visitor, exposing your hospital to significant risk. When it comes to the efficacy of your whole room disinfection strategy, there’s no room for compromise. But equally important to efficacy is your whole room disinfection system’s ability to achieve results at a cost you can afford. 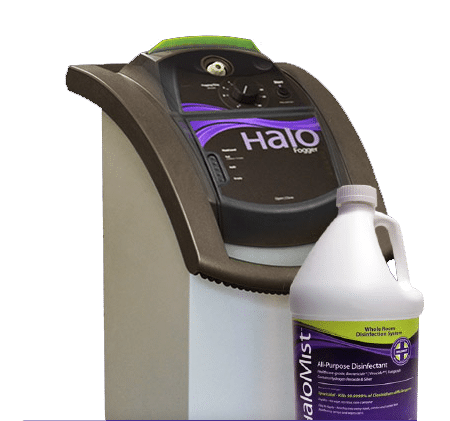 Kills 99.9999% of resistant C. difficile spores, even in areas beyond human or UV reach.

Flexibly disinfects diverse spaces and places throughout the hospital.

The HaloFogger® generates a turbulent aerosol that uses evaporation to ensure the uniform delivery of HaloMist™ throughout complex rooms—even in areas beyond the reach of humans and UV lights. HaloFogger’s exceptionally dry aerosol is safe for use around delicate medical electronics.

The Halo Disinfection System® is EPA-validated to destroy a diverse range of spores, bacteria, fungi and viruses. Specific kill claims can be found below.

The envelope is needed to aid in attachment of the virus to the host cell, and with loss of the envelope comes a loss of infectivity. Coronaviruses are believed to cause a significant percentage of all common colds in adults and children. The viruses cause colds with major symptoms in humans primarily in the winter and early spring seasons. Coronaviruses often spread person to person via respiratory droplets produced when an infected person coughs or sneezes, similar to how influenza and other respiratory pathogens spread.

Additionally, the SARS coronavirus strain demonstrated both respiratory and intestinal (fecal-oral) transmission. The release of infectious SARS viruses not only into the air, but also into the water supply, further amplified the need for an effective halt to potential environmental transmission.